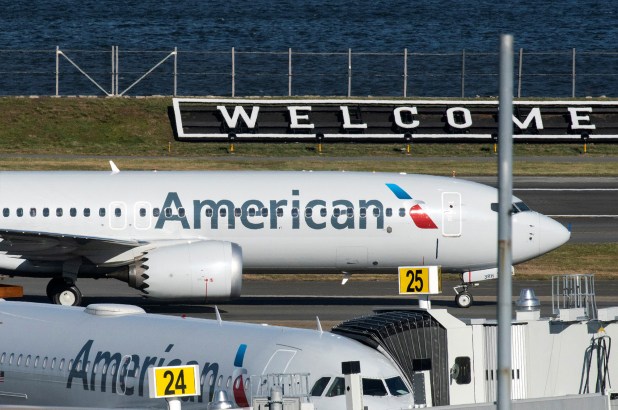 An American Airlines Boeing 737 MAX, seen here at LaGuardia last year, landed safely in Newark on March 5, 2021, after its captain had to shut down an engine.
REUTERS

Disaster was averted at Newark Liberty Airport Friday, when an American Airlines flight landed safely after an engine had to be shut down due to a possible mechanical issue.

Flight 2555 from Miami landed without incident, with 95 passengers and six crew members aboard, according to the airline.

The Boeing 737 MAX’s possible issue was related to an engine oil pressure or volume indicator — not the MCAS system failure that was linked to two fatal crashes in 2018 and 2019 that killed 346 people, officials said.

Boeing Co. said it was aware of the American emergency, and the FAA is investigating.

“For that reason, it is inevitable that at some time in the future, a Boeing 737 MAX will turn back to its originating airport, divert or land at its destination with an actual or suspected in-flight problem,” Dickson said at the time.

“It’s very important to differentiate between these routine events that happen with any aircraft and the acute safety issues that led to the loss of lives and grounding of the MAX.”

Former President Trump grounded the model in March 2019 after a 737 MAX crashed shortly after takeoff in Ethiopia, killing all 157 people on board.

That crash came months after a Lion Air flight plunged into the ocean after taking off from Indonesia, claiming 189 lives.

Eric Adams ripsYang for focus on parking placards over crime

NYPD defends the use of ‘no-knock’ warrants